Yesterday, I attended the NERCOMP WordPress University SIG, a showcase of what some folks are doing with WordPress. 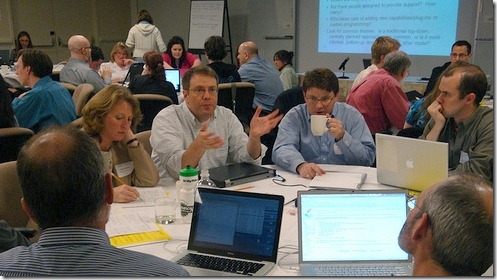 Develops custom plugins to do cool stuff. Uses WPMU at Yale. Showed a long list of the useful plugins that heâ€™s used, then a shorter list of the must-haves. (Waiting for his slide deck!) Showed some of the ways heâ€™s used plugins to do all kinds of things; currently heâ€™s working on a super gallery mechanism (GalleryPress).

Used WordPress to solve a problem. Was asked to make an authenticated but anonymous online survey, by the end of the week. Used WordPress and a couple plugins, and used MS Access to report from the database. only took a few hours.

Take-away: itâ€™s easier to ask for forgiveness than permission

Developer of Scriblio. Using information that already existing and connecting it new and interesting/useful ways. WP-powered website. Custom plugins make re-arranging all the content on sites easy, with no coding. Casey changed the production website from the conference. He was smug; I was horrified.

Overview of direction of WordPress. WordPress Foundation now owns all IP, so no one can â€œturn evilâ€ and claim they have rights to some or all of WP.

Quote: “We built the plane as we were flying it.”

Plain-vanilla WPMU+BuddyPress contrasted with theming work and additional plugins. Interesting discussion of the â€œmiddle spaceâ€ between purely academic and purely social experiences and interactions. Leveraging the groups and forums. Discussed the possibilities of the activity streams associated with each user/group/etc. Integrated some wordpress wiki-like functionality, also mediaWiki. Place for collaboration.

The organizerâ€™s page/post where heâ€™ll be linking materials from the event:

Posts by an instructor at CUNY, using WordPress as the center of the online learning experience.

Alternate Worlds: Teaching with an â€œOpen LMSâ€ and

Iâ€™m also waiting to get Ioannisâ€™ (Yanniâ€™s) deck with the list of most useful plugins.

Geoff
Sr. System Administrator at the University of Vermont View all posts by Geoff →

This site uses Akismet to reduce spam. Learn how your comment data is processed.